In 1801 the 9th Laird of Burnside had plans drawn up for the establishment of a ‘New Town’ at the ‘North Ferry’ and these plans were further were developed in 1825. Therefore in 1820 discussions began to consider the founding of a Chapel of Ease in Broughty Ferry since the parishioners had to walk to the local parish Church at Monifieth. This Church was later known as St Aidan’s and began in 1826. As the Ferry expanded and wealthy businessmen moved into the new town several new Churches sprang up, and a number of these patrons favoured High-Church traditions.

Thomas Taylor was a linen merchant and lived at Cambustay. He was one of the founding members of St. Stephen’s Church in Broughty Ferry where Dr Cooper became the minister. Dr Cooper followed high Church traditions but the following minister at St. Stephen’s, Dr James Leask, did not, and Mr. Taylor therefore resigned as an elder. Along with 14 other members of St Stephen’s and 59 other signatories he petitioned Dundee Presbytery to erect a Church at Barnhill. Dr Cooper suggested that his own first assistant at Aberdeen, the Rev. Thomas Newbigging Adamson, should become the minister of this new Church in Barnhill.

Initially this Church came under the authority of Monifieth Kirk Session but Mr Adamson introduced High-Church aspects of worship such as decorations within the Church building, daily services and regular communion services. This led to friction with the mother Church, complaints to Presbytery, and an appeal to the General Assembly in 1902. The Barnhill Case (as it was called) had implications for the wider Church of Scotland, and eventually led to changes in the styles of worship within the Church.

The first service was held on 8 June 1884 and the Rev. Thomas N. Adamson, was ordained in St Margaret’s Chapel on 30 October 1884. At this time there were only 54 communicant members. The Church grew and St Margaret’s was granted full status as a parish Church in March 1907. 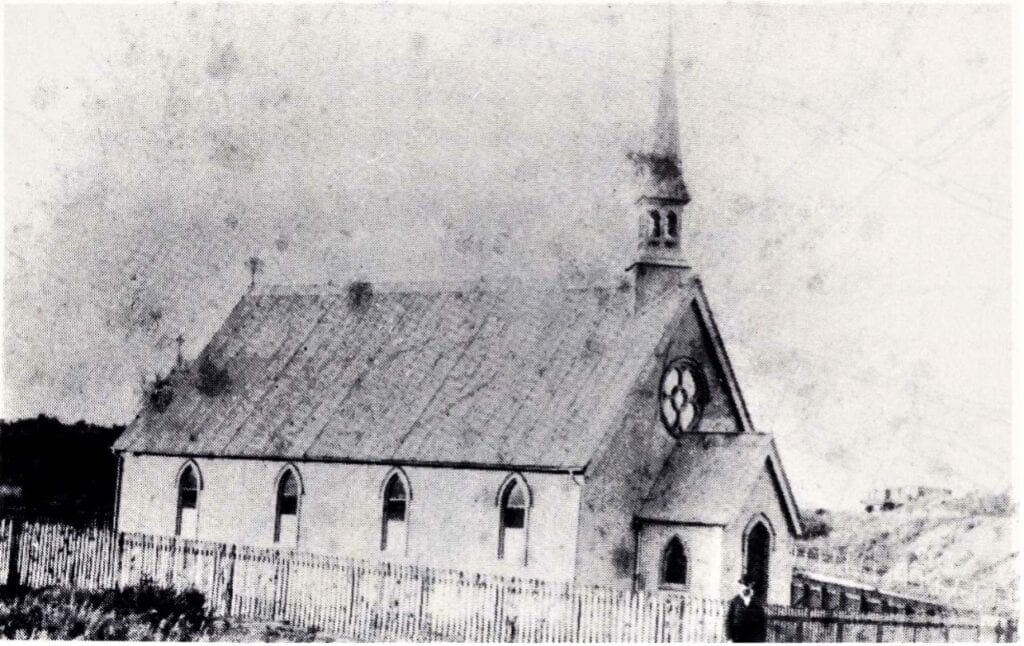 Picture of the Tin Kirk from around 1884
The original building was a second-hand ‘tin kirk’ which was located on Dalhousie Road. Despite its humble origins, Mr Adamson made attempts to make the inside of the building look beautiful. Some of these items such as the stained-glass windows were later transferred into the new stone Church when this was built on a more prominent position slightly further up the hill. The tin kirk then became the Church Hall. 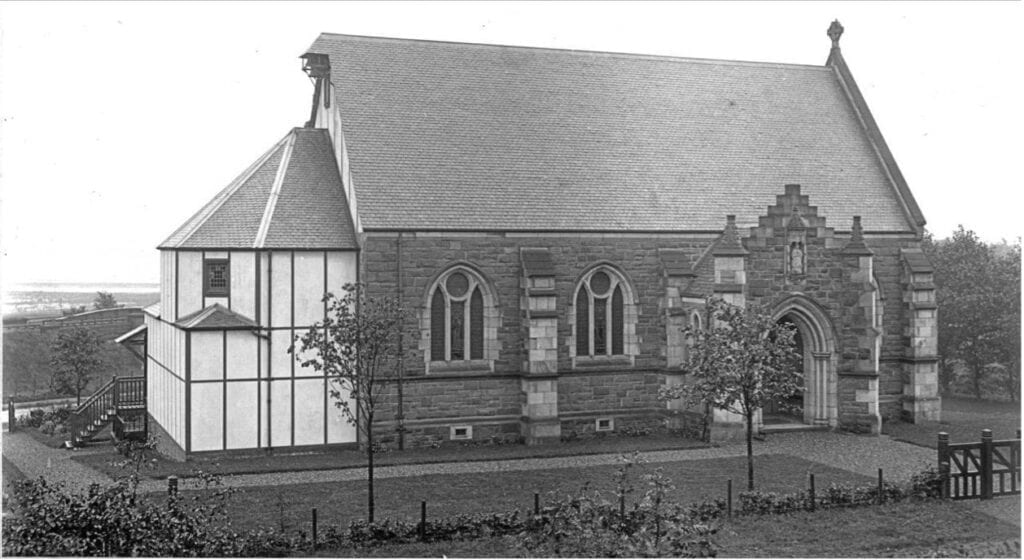 Picture of the first phase of the stone Church from 1910

The original architect was Charles Carmichael, but he died in 1890 and Duncan Carmichael (who was not related) oversaw the construction to Charles’ plan. The initial building consisted of an aisleless nave, but the original plans were for a cruciform Church just as we see it at present. The completion of this plan occurred in 2 subsequent phases, with the transepts built in 1932 and the chancel and session room in 1979.Charles Carmichael included features from other historic Churches in his original design to ensure that St Margaret’s was a place of beauty for the worship of God. This tradition has been continued over the years and is particularly noticeable in our stained glass windows.

The Church also had a large manse, and a beadle’s house (which was originally built as an orphanage), but both of these have since been sold as private homes. In 2008 the old hall and tin kirk were demolished and a new hall was built that is more suitable for modern day life. Just as our building has evolved, so have the people and over our 135-year history we have been led by 10 different ministers.

If you are interested to learn more of our history, a short e-book was written in 2020 that gives much more information on the ministers and the history of the Church, its windows and its fittings. It also contains more historic illustrations, and photographs of the present building. “A Short History of Barnhill St Margaret’s Parish Church 1884-2020” is available from Lulu.com for £2.99.

Mr Clement T. Godfrey was a jute and linen merchant, magistrate, choir member, founding member and elder at St Margaret’s. Mr Godfrey died in 1925 and this memorial was erected in 1933.

The stained-glass window is divided into nine panels. Five of these are in the shape of a cross and depict scenes from the life of St Margaret: her landing in Scotland, her marriage to King Malcolm, her charity, her piety, and her death.

At the base, Noah’s Ark reminds us of God’s Old Covenant and the chalice and paten remind us of Communion, and God’s New Covenant with all people. In the centre linking the two is the cross and the crown of victory. Above the panels showing St Margaret’s charity and piety are a pelican feeding its young (representing sacrifice) and a mountain top (representing aspiration).

The inscription reads ‘To the Glory of God, and in loving memory of Clement Tom Godfrey, a member of this Church from its beginning. Erected by members of the family’. It was unveiled on 23 July 1933, the same day as the War Memorial. It was made by J.T. & C.E. Stewart of Glasgow and may have been designed by Mr Godfrey’s sister.

The window in the west wall is based on the Collegiate Church at Seton, Longniddry. The glass was replaced by the present stained-glass window and was dedicated on 18th May 1917 by Rev. Professor James Cooper. The congregation subscribed to the window as a memorial to the 11 men of the parish who had already died in the First World War. Subsequently a plaque was added with the names of all 17 men who died during or shortly after the War. The window was designed by Professor Robert Anning Bell and was executed by the Stephen Adam Studio of Glasgow. Anning Bell was one of a talented group of free-lance designers employed by the studio who kept it going during a difficult period in its history. Barnhill St Margaret’s window is thought to be one of his finest designs. It is a good example from the Stephen Adam Studio with high quality glass used throughout. The two panels on the left show ‘The Way of the Cross’, whereas the two panels on the right illustrate ‘The Garden of the Resurrection’. The two texts are words of Jesus, ‘Greater love hath no man than this, that a man lay down his life for his friends’, and ‘I am the Resurrection and the Life. Whosoever believeth in Me shall never die’. As well as commemorating the supreme sacrifice made by individuals in war, these texts also remind us of the great truths of the Christian faith – that God has a very great love for us, and that there is a resurrection life that we can share in. The central figure is St Andrew as a fisherman with his net. Scottish thistles adorn either side and above is a cross decorated with jewels and flowers, and held by two angels. Below is a scene from the call of Andrew to be a follower of Jesus. On the left is St Columba bearing a staff and a Book of the Gospels. Columba was one of the founders of our faith in Scotland, and the scene below shows his voyage to Iona. On the right is St Kentigern (Mungo) bearing a bishop’s crosier and a fish. The small scene shows one of the stories associated with him, recovering a ring from the mouth of a salmon.

The top of the window shows angels with instruments of praise to God. The inscription reads ‘To the Glory of God and in Loving Memory of Norman Pattulo who died at sea, 23 February 1937’.

The window was given by Mr Patullo’s widow, and is the work of Herbert Hendrie. He was one of the foremost designers of the first half of the twentieth century, and his jewel-like designs feature in a number of Churches including the Anglican cathedral in Liverpool, and Kippen Church. Mr Adamson installed 8 stained glass windows in the Tin Kirk and 7 of these were transferred to the new Church. From east to west on the south wall of the nave are four windows, and on the north wall of the nave there are three windows.

The most westerly window on the south is of the Blessed Virgin, the mother of Jesus. Pictures of Mary are uncommon in Reformed Churches and the connection is probably an old chapel to St Mary on an island in the Tay, now a sandbank called Lady Bank. The next window shows Margaret’s youngest son, St David with his falcon. David became King David I and founded a number of monasteries.

The third window on the south represents St Margaret bearing her cross. Margaret was born in Hungary but was a princess of the Wessex royal family. She married Malcolm III, king of Scotland in 1070. Margaret reformed the Celtic Church by introducing Roman forms of worship. The most easterly window on the south side represents St Ninian, our earliest missionary, carrying his Church at Whithorn in his left hand. A copy of this window is reported to be in St Ninian’s High School, Kirkintilloch.
A short, illustrated booklet on the windows is available from the Church.

Kentigern, Andrew and Bride, north side of the nave

The most easterly window on the north represents St Kentigern or St Mungo with his symbol of a fish. The second window on the north side is St Andrew with his cross. Andrew was one of Jesus’ first followers and is, of course, our national patron saint. The third window at the west end of the Church shows St Bride, who has local connections with Abernethy, and gives her name to Panbride. 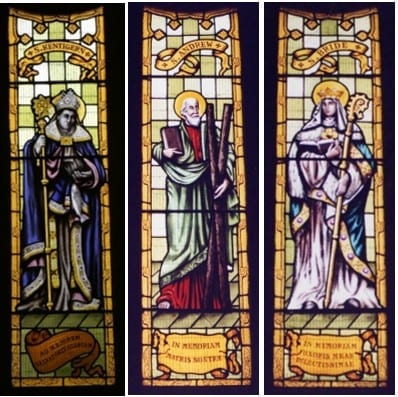 Map taken from OpenStreetMap (www.openstreetmap.org), which is made available under the Open Database License (ODbL). 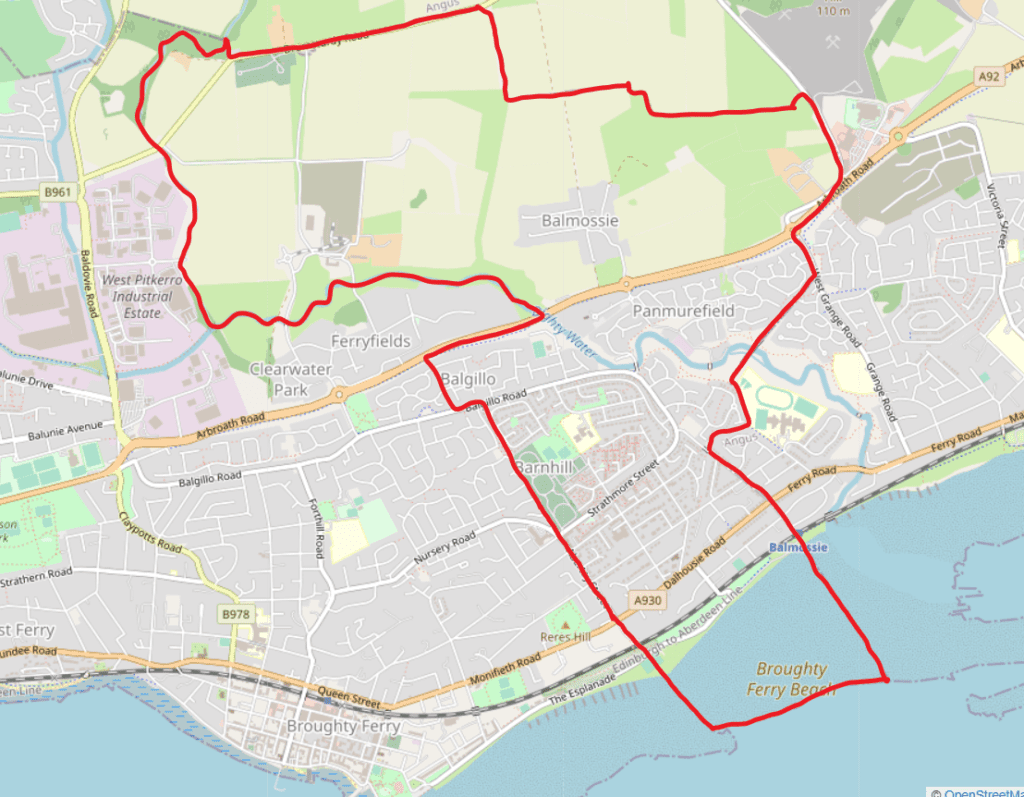